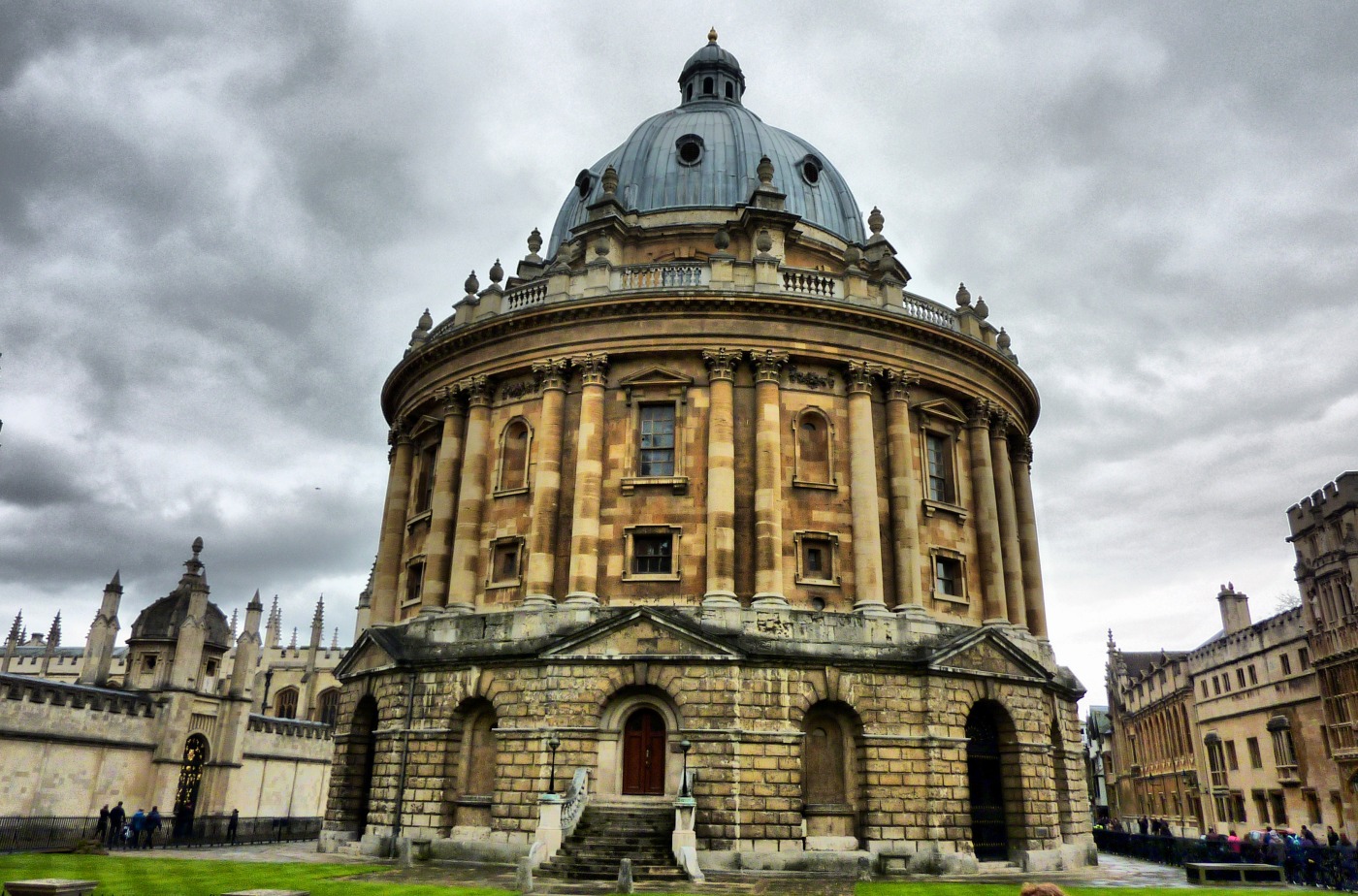 So, haven’t written in awhile.  I did this family holiday thing in Orlando (where I completed a 15 mile run as well as a likely 10k while hauling 4-year-old across the Magic Kingdom).  I have done plenty of core training via pole fitness.  I didn’t meet my 18-mile run goal but as it’s now pretty dang close to the London Marathon I thought “Eh, I’ve run 2 marathons already, so I’ll just skip to the 20-miler and all will be good.”  I rested all Saturday and looked at the pleasantly-overcast Sunday as the ideal day.

Oh, man, the pain.  I’ve got so much figured out, but my hips this run where so unhappy.  I had altered my run slightly to ensure I ran through as many pretty places of Oxford as possible to keep my mind off of it.  I had backlogged podcasts so I had plenty to listen to.  I had eaten bananas… so many bananas.

It was mile 18.8.  I know this because this was the point I pulled out my phone.  I was at the Radcliffe Camera, which cuts over to this really cool passage that I thought would be an excellent way to end (and also conveniently near a bus stop home).  It’s a beautiful area. Seriously, look: 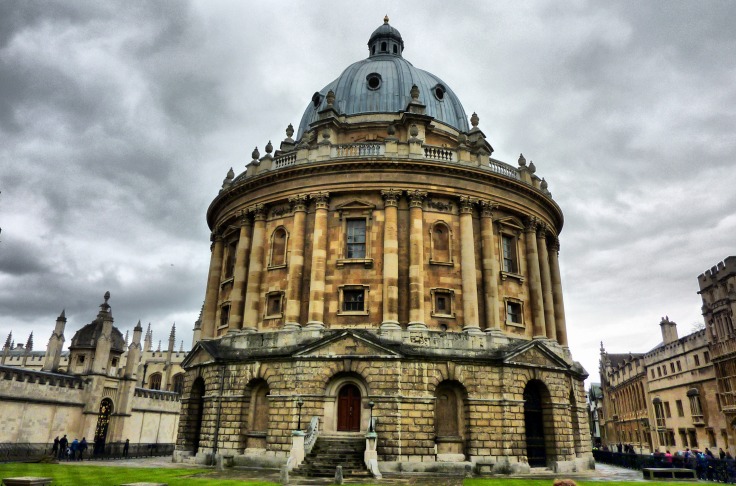 Funny thing the area you see to the right of the screen was blocked off.  Some people with barriers and yellow jackets.  I immediately realised that there was a high likelihood of filming going on in the area.  There is lots of filming in Oxford, so I pulled my phone out and thought I would see about capturing some of it.  It would likely be an Inspector Lewis or perhaps a documentary… sometimes cool things like X-Men get filmed there and there was hearsay that Benedict Cumberbatch filmed at Trinity College not too long ago.

Regardless, the whole little event would get my mind off the pain I was feeling.  Not to mention the fact that my brain kindly reminded me that if this were the real deal I would be undergoing 8 more miles of said pain.

As I approached the Bodleian Library I saw a knot of people with cameras and the top of a head.  My first thought was, “Oh, wow, it’s John Barrowman!” 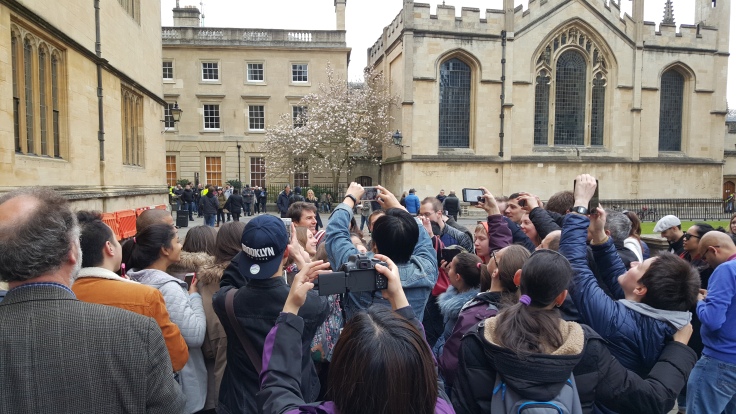 And so here is what is going through my head: “Why is John Barrowman hanging out in Oxford?  I mean, he’s actually Scottish but he lived in America for such a long time he’s never gotten his accent back.  Isn’t he actually doing a series in America?  Maybe he’s doing something here.  I loved him in Doctor Who…  Oh, I can get closer…” 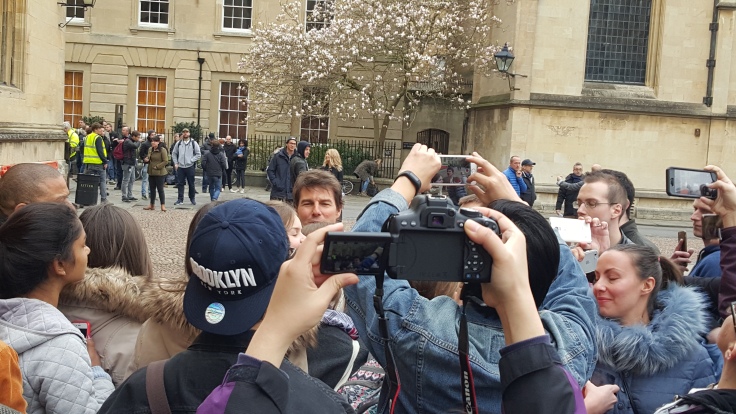 “My husband is going to be so jealous.  Wow, he’s got a lot of security with him I didn’t think he’d have so much but that’s cool.  And he’s talking to people… funny… that doesn’t sound like his voice.  That sounds a lot like Tom Cruise…” 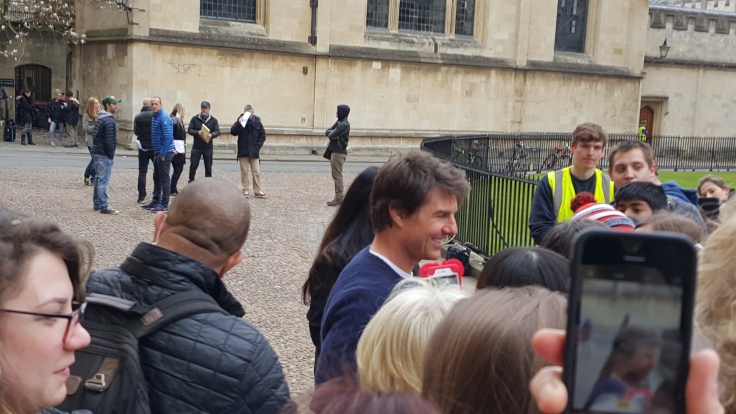 “Holy pile of expletives, that IS Tom Cruise.”

I had managed through some sort of will, or perhaps because I was at mile 18.8 and likely smelled very much like it that a hole in the barrier had opened up and he was working my way.  Mr. Cruise spent a few moments with every person and was very polite.  He also looked amazing.  I mustered every ounce of polite attitude and patience to make sure everyone who was there before me got their chance (it’s the British way).  He looked at me and said hello.  I told him I was out on a twenty mile training run and didn’t expect to see him in route.  His response, “Twenty miles?  Hey, that’s great!”  And then we got a photo: 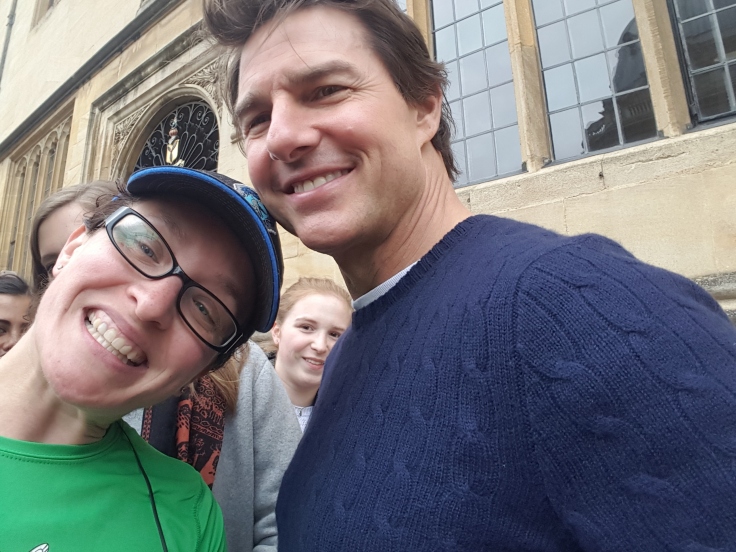 Finally, I would like to invite John Barrowman to Oxford next weekend for my 22-miler.  In front of the Bodleian if you don’t mind because that is where I meet famous people. I’m totally sure he can do this.  And, if you can’t, John, I’m cool with a picture of you with a sign saying, “GO CRISTIN!  WHOEVER YOU ARE!”

Author’s Update:  My husband has informed me that currently John Barrowman is frolicking in a pool in Palm Springs, California, in red high heels according to recent Facebook posts.  As this is totally awesome I can understand if he cannot make my Oxford request immediately.  However, if he can make the sign whilst frolicking in red high heels my whole life would pretty much be complete.