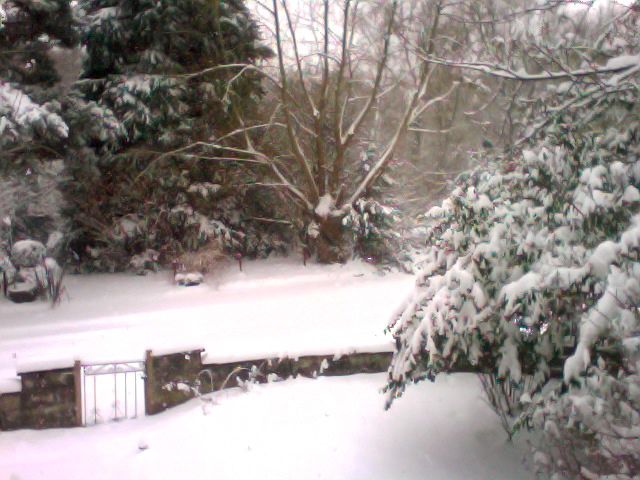 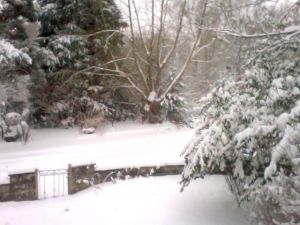 So, on December 17, 2010 I passed my second anniversary of living in England.

Before I moved to England, I did research. Primarily this research was born out of two things:

The research yielded that, during the “winter time” the average temperatures for Oxford would be in the mid to low 50s F.  Snow was a rare occurence.

And so, armed with that knowledge I a) purchased boots and b) found some comfort that I would not be exposed to things I was not familiar with, such as snow.

My first Christmas passed in a bit of a blur (I ended up with the flu) but it was highlighted with a visit from my bestie and his wife.  We were going to explore my new city, and so we went to the Oxford Castle, which for most would be called the Oxford Mound of Dirt.  To be fair there is grass on the mound of dirt.  (‘Castle’ is the Norman word for ‘Mound of Dirt.’  Really, look it up.)  Behind this mound is a Victorian jail (or gaol) with attached Saxon tower.  Today the jail/gaol is part museum, part posh hotel, and you can get little tours.  I don’t remember much of the tour guides talk except that when he lead us to the top of the Saxon tower he spoke of a queen who escaped the city in a white cape in four feet of snow.

I recall this because my mind said to me at the time, “Ha. It doesn’t snow in Oxford like that anymore.”

Fast forward to February, and I was standing in two feet of it.

The British news was in an uproar. Actually, they always are over something, but at the time this was new. The roads were closed, airports shut, and by goodness gracious there was not enough salt or snow plows and everyone was going to die.  At the time I was hunting for work, so none of that phased me in the slightest except for interview days.  I built a snow man, snow bunnies, and a snow dragon.  And when I found my fabulous new place of work I biked in in the glorious start of Spring.  The freakish weather gone I thought, “Well, perhaps Oxford just does snow a bit more regularly than the dusting we get in the south every ten years.”

Fast forward one year later, and I was walking in four feet of it to work.  This first year anniversary of living in England saw absolute shut-downs all over the city of Oxford.  It happened right around Christmas so people were loathe to return to work, even when it turned out that the snow was more of a powder than an icing.  Oxford University had to threaten its staff with deducting holiday time to get them to come back, and it was at that moment I realized:

It snows in Oxford EVERY YEAR.

Based on my findings it is the British populace, or at least the media, who like to believe every year it doesn’t snow in England.  What has to happen is the actual event itself, which is always deemed worse than the year before, before they will even believe that it really does snow in England.  And then, like as if locked away, their memories will spring forth all the years it has snowed in England – which is every year.

So, as I sit here typing this as the inches pile up outside my door I will say this, “I believe in snow.  I believe that next year it will snow.  And I can buy more boots.  Yes, lots and lots of boots.  Because it will snow this year, and next year, and the year after that.”

Now, just to make it last long enough for a white Christmas.

2 thoughts on “The Belief in Snow.”